To share your memory on the wall of Bobby Leigh, sign in using one of the following options:

Provide comfort for the family of Bobby Leigh with a meaningful gesture of sympathy.

His funeral service will be 2 PM Thursday at Wilkinson Funeral Home Chapel officiated by Rev. Gene Edwards. Burial will follow at West Concord Cemetery. The family will receive friends beginning at 11:30am Thursday at the funeral home.

Bob was born October 23, 1931 in Concord to the late Ira “Mutt” Leigh and Radie “Peg” Morris Leigh. He was also preceded in death by his wife Oralene Hagler Leigh, son Gary Leigh, and sister Ruth L. Frye. Bob sold insurance for Western-Southern, and later established Bob Leigh Insurance Co. In 1979, Bob and Oralene opened “Flowers by Oralene”, a continuing family business. Bob was a religious man and attended Cold Water Baptist Church and Genesis Baptist Church. He had a positive sense of humor and loved talking politics, racing, and religion.

Condolences may be sent to www.wilkinsonfuneralhome.com
Wilkinson Funeral Home is serving the Leigh family.
Read Less

We encourage you to share your most beloved memories of Bobby here, so that the family and other loved ones can always see it. You can upload cherished photographs, or share your favorite stories, and can even comment on those shared by others.

Posted Jan 26, 2020 at 04:38pm
So sorry to see this sad news of our neighbor and friend. I could always count on Bob and Oralene to send the most beautiful arrangements whenever we needed them..Our thoughts and prayers are with the family he leaves behind. God Bless You All. Tommy and Irene Russell
Comment Share
Share via:

Posted Jan 23, 2020 at 07:29pm
The world lost one of the best men this week. He was funny, caring, loving and smart. I always thought that he was the best dresser ever. I don't think he will ever be forgotten. I loved him so much and I know how you guys are grieving for him. Just know that he is with Oralene and Gary and still has that wonderful smile on his face.
Comment Share
Share via:
AK

Posted Jan 22, 2020 at 11:58pm
I only knew Bobby after he started Flowers by Oralene's but always found him to be a fair and honest business man with a pleasant & upbeat personality. I have done business with that family for many years and have always been pleased. I would like to extend my warmest sympathy to the family. Sincerely, Ann Scarboro Kluttz
Comment Share
Share via: 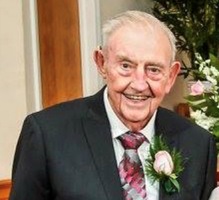