To share your memory on the wall of Robert Creech, sign in using one of the following options:

Print
Robert Reynolds Creech, Sr. died peacefully on October 26, 2019 in Ridgeland, SC. He was 94 years old. He was a loving husband, father and grandfather, known to his grandson as “Pappaw”.

Robert was born June 28, 1925 in Concord, NC... Read More
Robert Reynolds Creech, Sr. died peacefully on October 26, 2019 in Ridgeland, SC. He was 94 years old. He was a loving husband, father and grandfather, known to his grandson as “Pappaw”.

Most of his adult years were spent in Norwood, NC and in Charlotte.

He served in the army in Italy during World War II.

Robert was preceded in death by his parents; wife, Catherine Melton Creech; three sisters and one brother. He is survived by one brother, Charles Creech; a son, Robert (Karen); and grandson, Brian (Meghan).

A graveside service will take place at Oakwood Cemetery in Concord, NC on Friday, November 1, 2019 at 11:00 AM with military honors.

To send flowers to the family or plant a tree in memory of Robert Reynolds Creech, please visit our Heartfelt Sympathies Store. 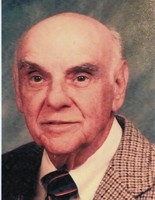