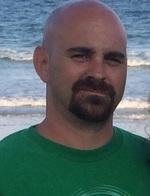 Joseph “Joe” Emidio Strefezza passed away peacefully in his home with his wife, Heather Mae Bramlett Strefezza, by his side on Thursday, March 21, 2019. Joe was 42 years old.

He was born in Manhasset, New York on April 17, 1976. He graduated from Sayville High School in 1994 and went on to earn his Associates Degree in Applied Science at The State University of New York in Delhi. He moved to Charlotte, North Carolina shortly thereafter and worked for Christopher Phelps & Associates. Joe then went on to own and operate SERVPRO of North Rowan County/Salisbury.

Joe met his wife Heather, in Charlotte in December 2000. They made their love official and married on September 25, 2004. Their son, Joseph “Joey” Brayden Strefezza, was born June 27, 2006. Joe was very analytical, handy and could fix just about anything and used these skills as an excuse to take apart everything he could just so he could see how it worked and put it back together, much to his wife’s dismay. They were a perfect match. He enjoyed riding his motorcycle, his bright yellow “Strazuki” and off-roading. He also loved anything outdoors, eating way too much ice cream with an abnormal ice cream to banana ratio and playfully annoying his wife. But nothing was more important than the time he spent with his son Joey, teaching him, loving him, laughing and learning from him. His sense of humor was infectious and he made everyone around him feel loved. No one thought Joe was funnier than Joe. In his son’s words, “he was awesome.” He was a deeply devoted husband, father, son, brother and friend. Joe will be missed more than words can ever describe.

All are welcome to be a part of Joe’s Celebration of Life which will be held at Wilkinson Funeral Home in Concord, NC on Thursday, March 28, 2019 at 4:00pm with the visitation following directly after from 5:00-7:00pm. Joe will be in casual attire as he would want you to be.

In lieu of flowers, the family requests donations be made to: Good Samaritan Animal Society, PO Box 60003, Savannah, Georgia 31420. The Humane Society of Concord, 2010 Wilshire Court SW, Concord, NC 28025 or a charity of your choice in Joe’s honor.

All rights reserved. This obituary is also archived at obittree.com